3 Comments
By M&J Petays about us, child's play

On one of those long drives somewhere, we decided to play a game with the boys to teach them plurals…

I decided it was my turn to be silly and ask “What do you call more than one Cooke boy?”  Noah replies ever so serious….”Chefs!”

Noah….such an intense child.  His body has been on the go since day one.  A bit of a challenge I must confess.  There were times that I definitely missed my mommy!  He’s passionate in everything from his anger and frustration, to his love.  He repeatedly tells me that he loves me all the way to China and back or around the moon 4 times or shows me using his fingers, toes, knees and elbows.

There hasn’t been an animal yet that he hasn’t loved and wanted to take home.  If he and his father had their way we’d be running a petting zoo in our backyard here in the city.    He’s headed to kindergarten this fall, and he just informed me that when he grows up he’s going to be a wolverine ninja.   I’d better make sure he has all the right classes so that he can achieve his dream. 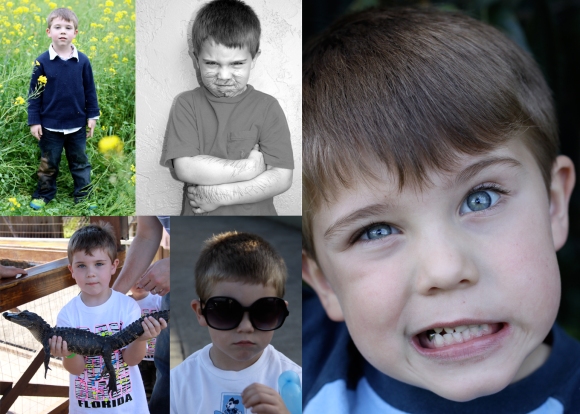 Simon…my food lover and affection hater.  “Snack….snack…snack…” is his constant mantra.  We have countless pictures of him eating.  He’s the messiest eater ever but hates to get his hands dirty.  “Nahkin, nahkin, nahkin…pees.”  He’s quite opposite from Noah when it comes to showing his love.  It’s a rare occasion that he gives out any hugs or kisses.  Good thing for that smile–he’s rarely short of those!  It came as a relief that he wasn’t quite as ‘busy’ as Noah.  I’d probably be committed somewhere if that was the case.

He’s well into his 2’s now so we’re dealing with the independence issues.  It takes 3 years to get into the Jeep,  4 years washing his hands and 10 years to ride his bike half a block.  He’s into throwing everything, including his fists and is experimenting with a second language, often referred to as potty talk.  David asked him the other day if he was poopy and he snaps back “I’m not poopy, I’m Simon!”  Then he calls me “Boots! I call you boots, that’s not potty talk.  Boots!”  Smarty pants!

3 thoughts on “the COOKE boys”