Styled by a Child

When I first saw Summer Bellessa’s blog go viral (the one where she let her toddler dress her for a week), I immediately  texted my sister and said WE HAVE TO DO THIS! I love the way kids view clothes…similar to the way fashion designers see clothes…no rules, nothing holding them back, no judgements.

I was cruising my Facebook page to see who I could pester to help me with the rest of my pulls. A friend had posted a photo of one of her daughters walking down the street with a pair of butterfly wings on…I immediately thought, “I want HER to style ME!” Luckily her and her equally awesome twin sister were game to come over and pull some great looks for me! Thank you Ezraylah + Iliana for your help in dressing me! I love the way you made a dress into a shirt and were careful to have each outfit completed right down to sunglasses + hats!

Melissa was able to come down for the weekend so we chose some of our favorite high fashion poses and really made it into a fashion shoot! Hope you enjoy this fun blog as much as we did!! 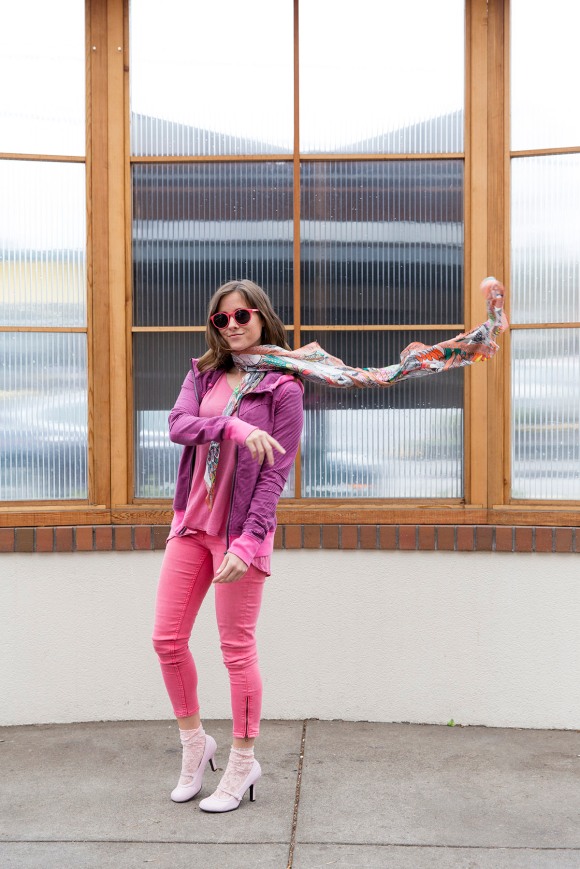 This green dress has special memories for me. It was one of the first pieces I bought when I moved to New York City. Yes…that means it has been in my closet for over 7 years. Should I be embarrassed? Some pieces just hold such great memories they are hard to get rid of. Glad she picked this one:) 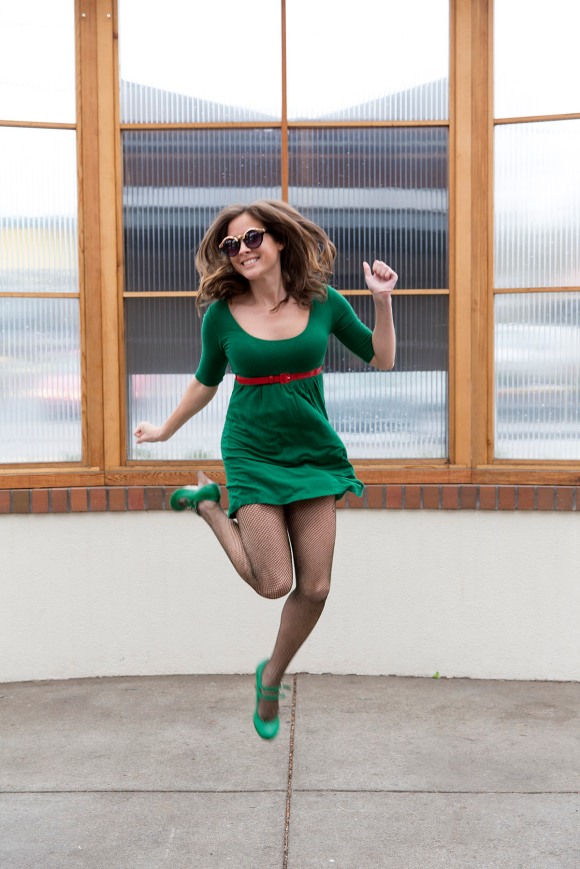 The outfit is influenced by Circles…if you hadn’t noticed already. 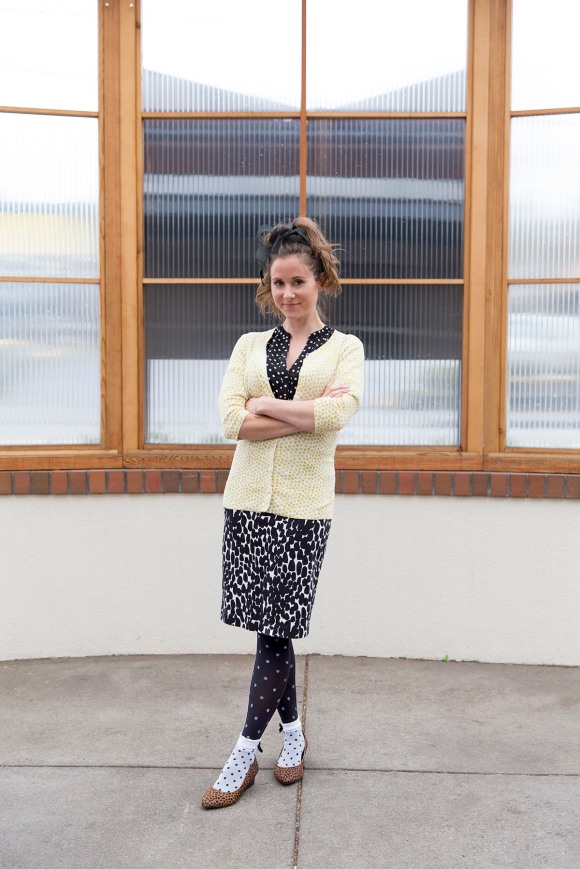 This has to be my favorite outfit of all. This skirt. The leggings. The mismatched shoes. Most random shirt. I am just in love with it all. 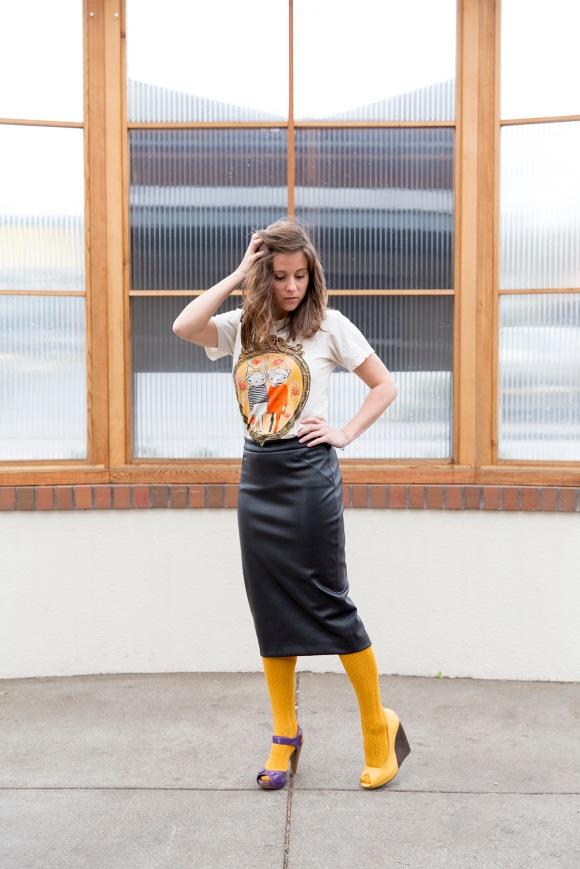 I call this my Paris Chic outfit. There is just something about this dress that makes a person smile. Love the details she chose…right down to the belt and hat. I would easily wear this one! 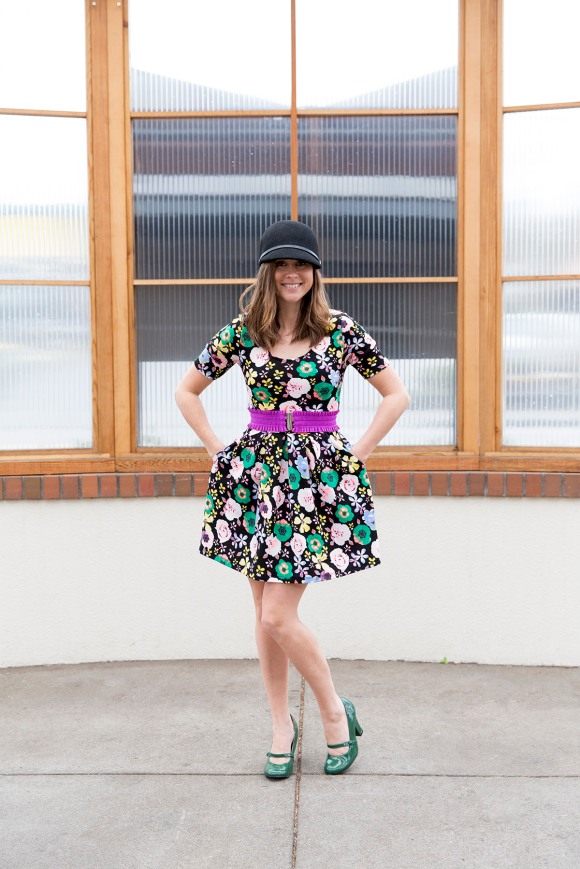 Now this outfit has all my favorite elements in it. Some black + white, lots of sparkle + shine, some pink…It’s a bit of a mishmash! I love how Ezraylah made this B+W dress into a shirt rather than keeping it as a dress. Not something that we, as typical consumers tend to think about doing when we buy something. Clever young lady! 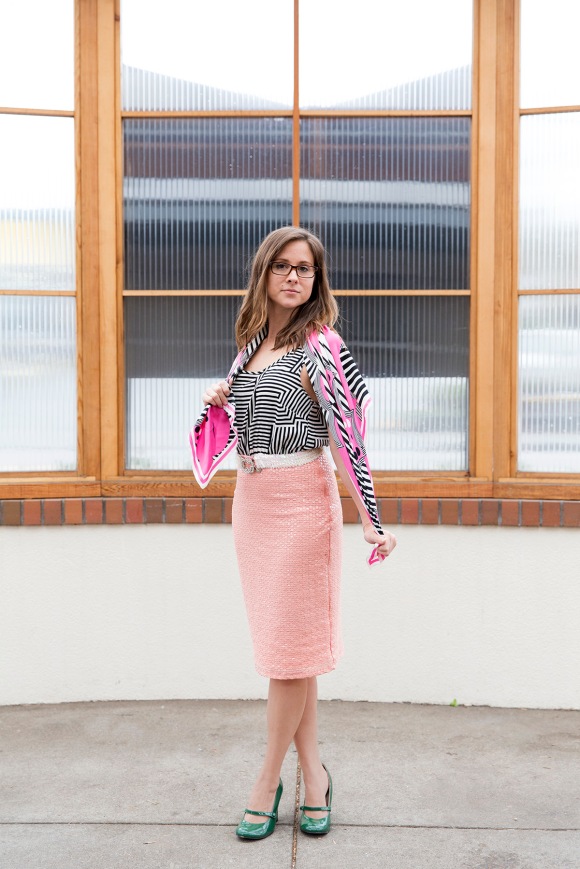 This outfit has A LOT going on! But hey! If you want to stand out here in Eugene…you HAVE to have A LOT going on! Love the blinged out hat, aviators, and of course…a shiny pink skirt!

I personally love this outfit. It kind breaks all the rules…and yet kinda looks pretty cool? I would have never put a belt with this outfit…or a plaid scarf…or matched pink sunnies with a red plaid scarf…yet…somehow this little 5 year old stylist did her thang’ and made it work! Love it! 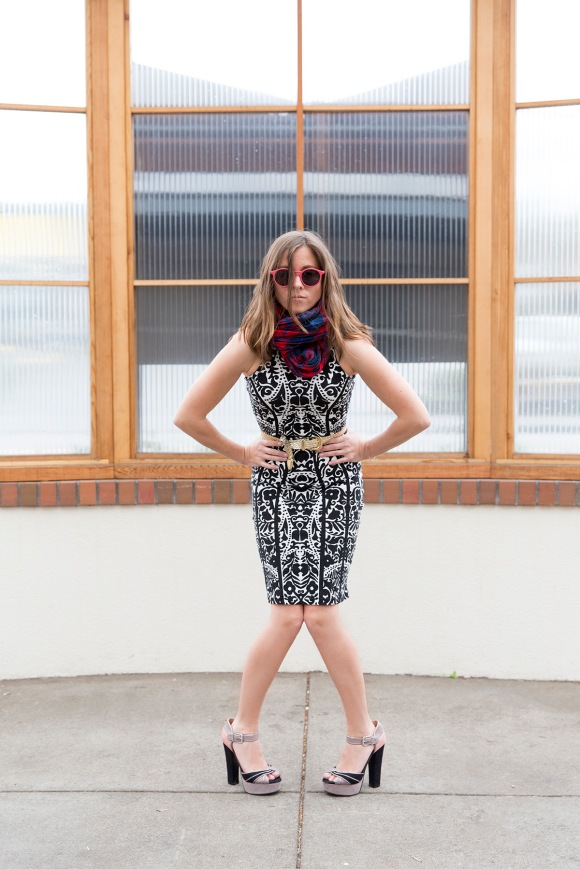 While Jenn had some looks that were downright adorable and even editorial, mine however were that of a colorblind man. Or were we just seeing the difference between the minds of boys and girls?

My boys Noah (10) and Simon (7) were completely on board with pulling looks for me. I was amused to watch them as they both put a lot of thought into selecting my outfits.  Originally they both chose a week of outfits but we only had time to shoot 4 each.  They thought it would be funny to put together one ‘crazy’ outfit each.  I included this ‘crazy’ outfit and I dare you to try to figure out which ones they are!

As I was watching them make their decisions, all the while hiding a smile, I couldn’t help but make some observations.  All shoes need socks regardless of style.  Highheels…socks, loafers…socks, flats…socks.  They also both seemed to prefer skirts/dresses to pants.  Noah, being an animal lover, gravitated towards animal prints.  At some point he decided that the outfits needed to be named and Simon jumped on board with this idea. To name a few looks that did not get photographed were ‘The Jungle’, ‘Big One 44’, ‘Everythings’ and ‘Red Hot’.  They were really disappointed when they found out we didn’t have time to photograph them all:(

Simon called this look Hodie (not to be mistaken for Hoodie).

He started the task by saying to himself “Start easy with socks.” I’d like to point out those precious Hello Kitty socks. The boys got these for my birthday because all girls like pink and Hello Kitty. 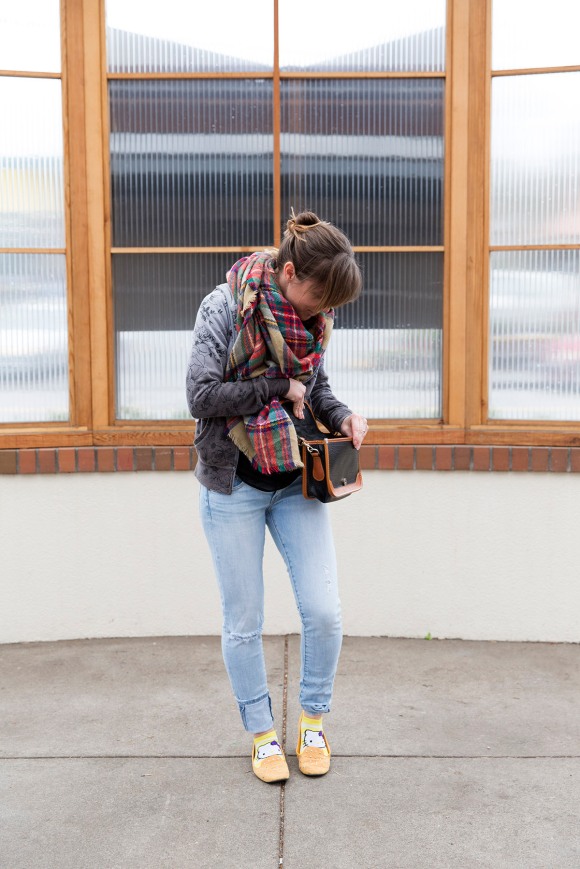 He started out trying to go with all white but because my summer stuff is put away in tubs it was tricky.  He then noticed the bird dress and he had to use it…with the flamingo socks.  Birds of a feather flock together? 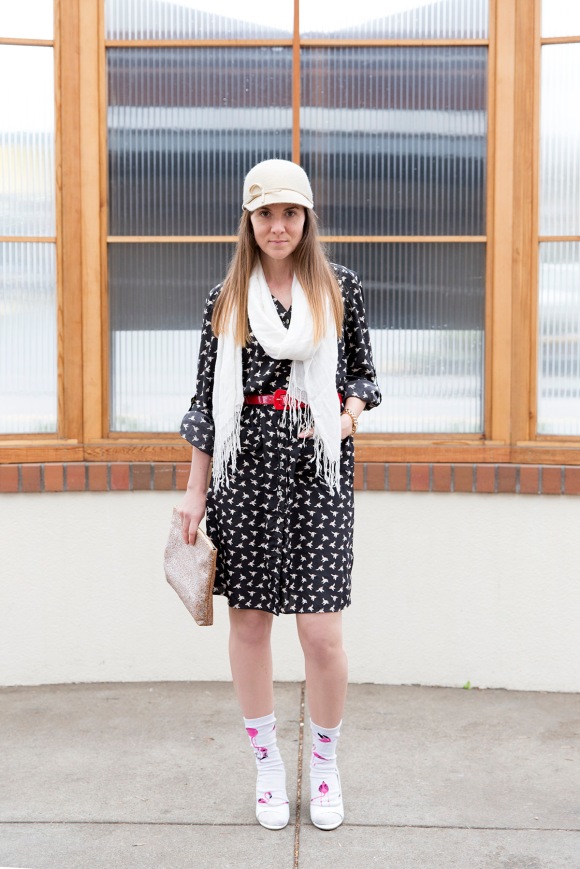 Noah called this one Storm Trooper 073.

Obvi.  I thought Noah had lost interest half way through because the next thing I know he’s downstairs doing crafts.  But nope.  He comes back up with a homemade construction paper gun to complete my Storm Trooper outfit.  Bless his heart.  Every woman needs one of those in her purse. 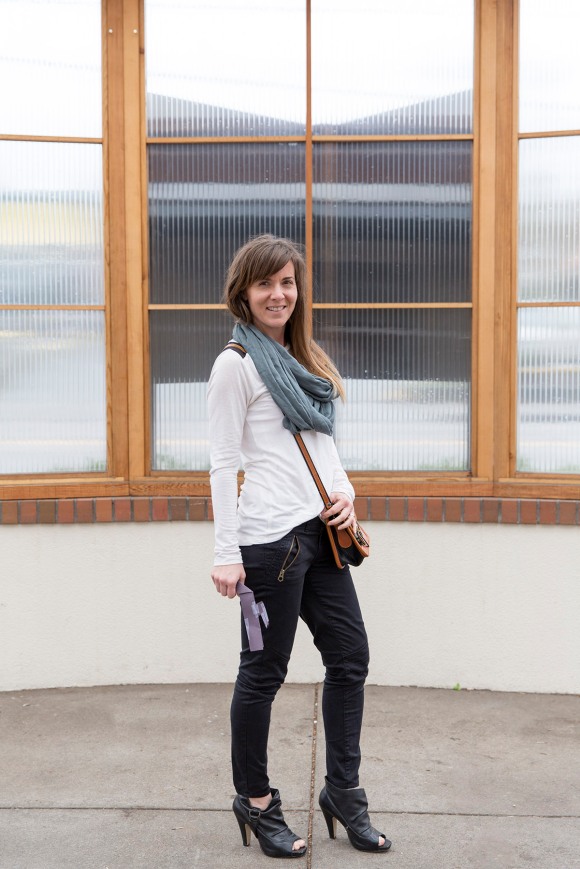 Simon called this one Rigie Pigey.

I have no words. 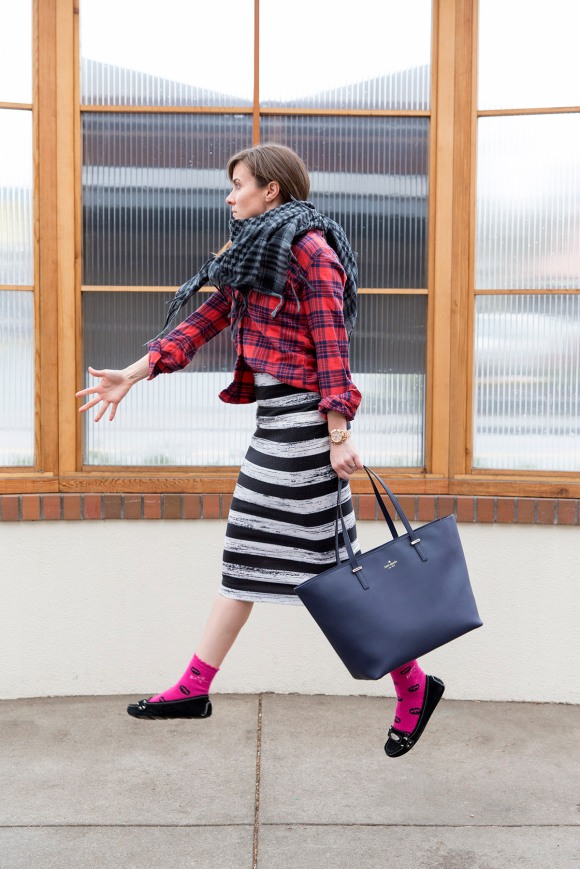 Well the name gives it away.  This is Noah’s wild outrageous look.  The color combination with the stripes is not a good look if you were to ask him.  The burning question in my mind was, why do I still have that hat? 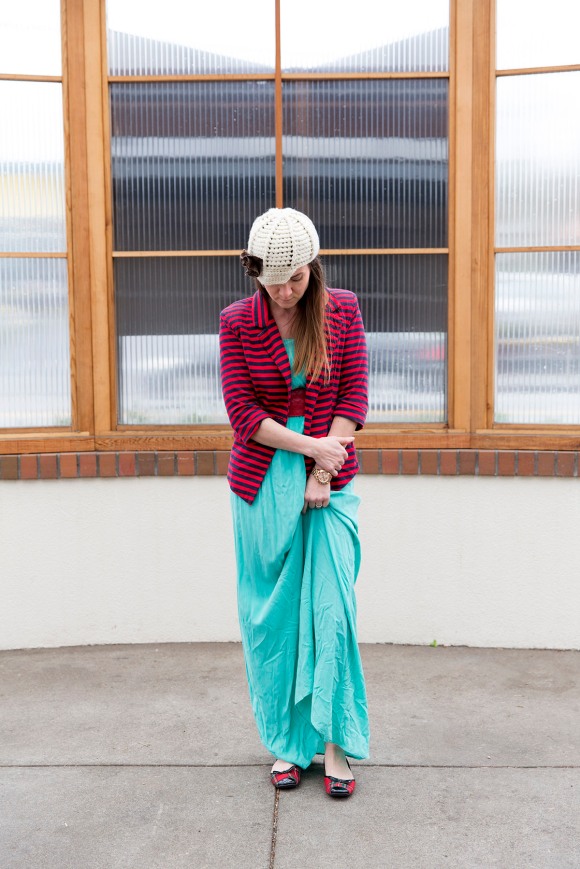 Even though he choose this dress as part of this ensemble, last Sunday when I wore it to church (styled differently however), he was mortified! “You’re going to wear that?!” He told me that he thought it was inappropriate for Sunday. Apparently he has reached the age of embarrassment.  Ohhhh…this is gonna be fun! 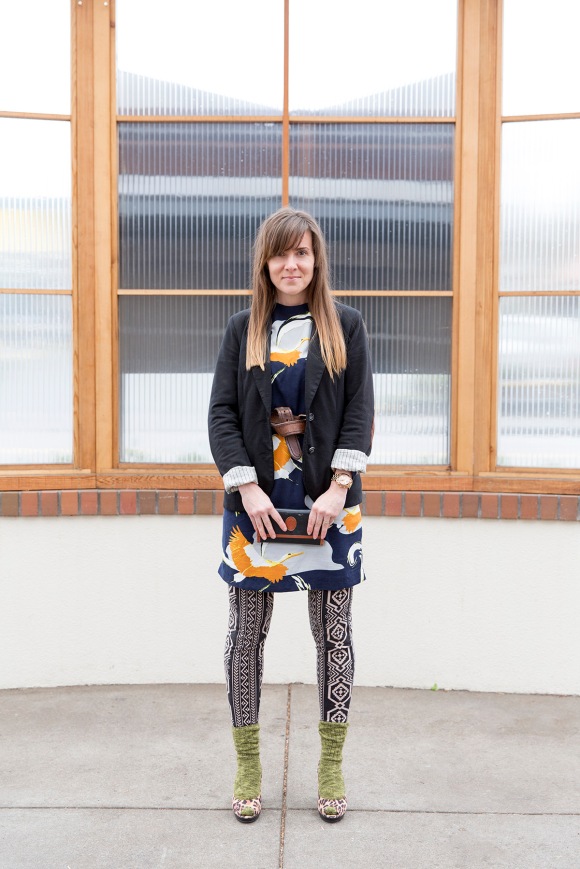 Haha…I love that in his eyes this outfit was clearly nuts, meanwhile it’s just as random as the rest!

(Again with the hat!  I really need to re edit my closet!) 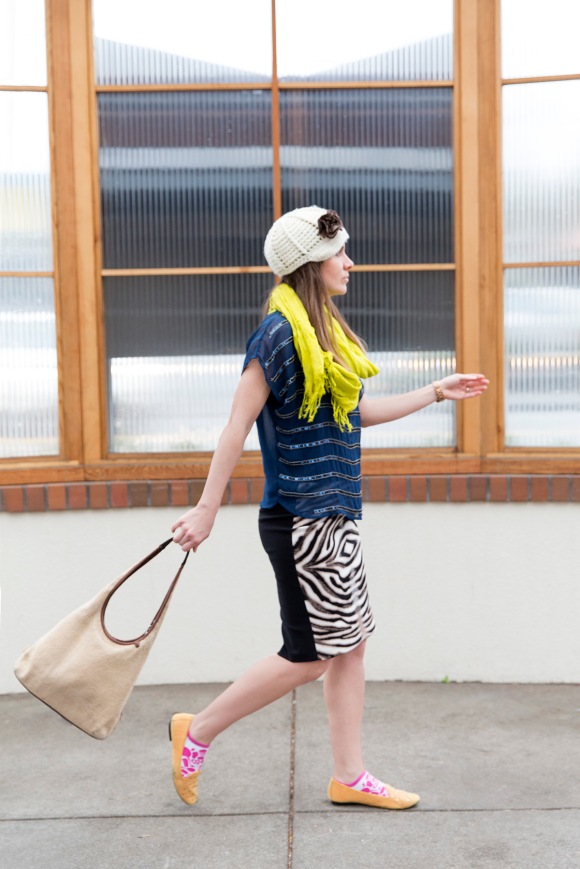 So even though there are some favorite accessories of mine in this outfit, they just don’t work all together. This is me hanging my head in shame! 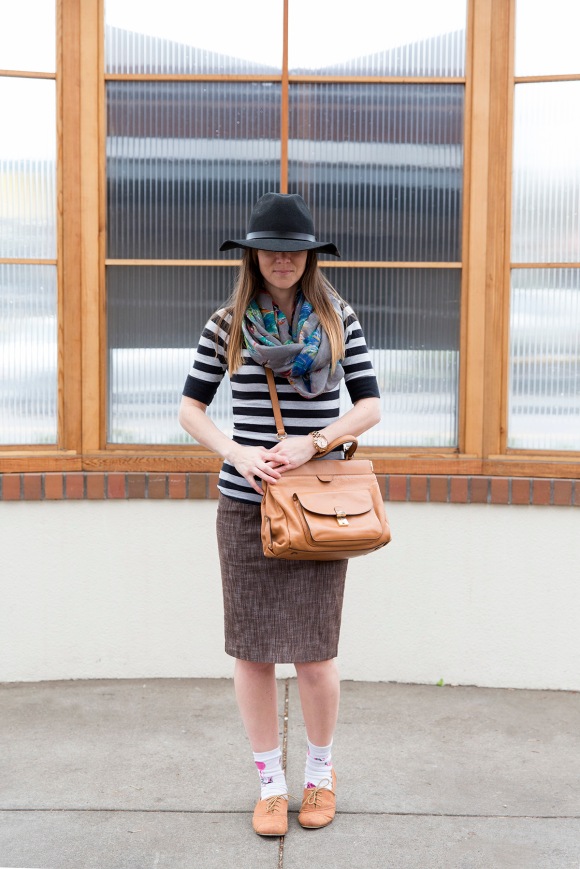 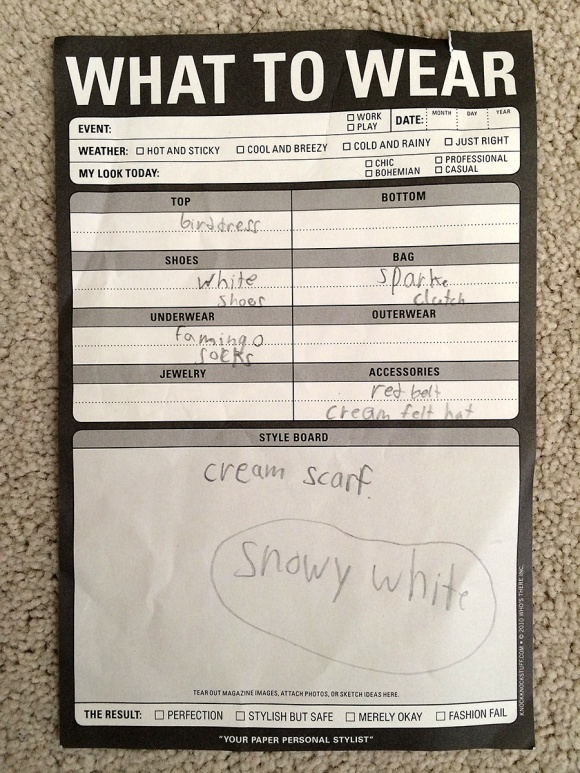 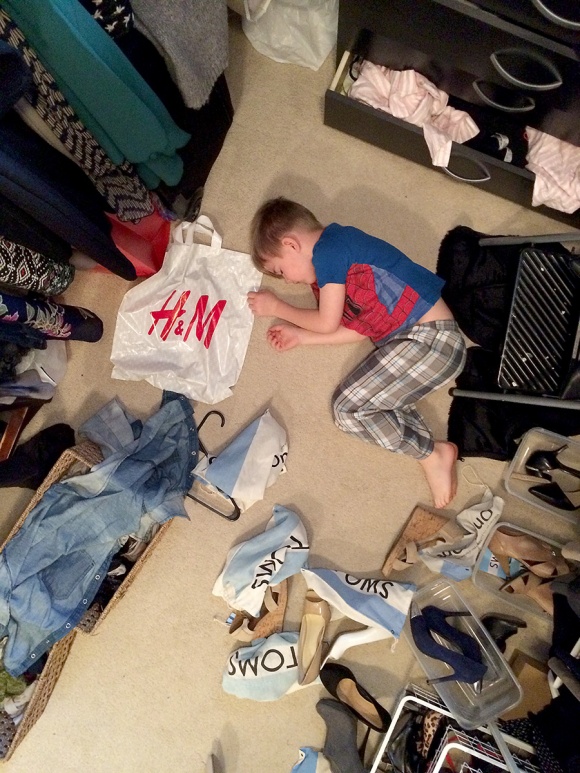 My friends and family get a laugh out of how thrifty I can be.  The story that everyone loves to tell on me is the time I found a pink, puffy, GAP vest at a thrift store for $5.  Well…the next day was a 30% off day (I know right?  a discount day at a thrift store…how cool is that??) so I hid it and came back the next day and saved myself a whopping…$1.50!  Oh yeah!  You know what I can buy for $1.50?  Yeah?  I can’t think of anything right now either…

This month was a great month for finds!  ZAC freaking POSEN is now taking up space in my closet!  I don’t even care that I found him at Target.  Reminds me of NY fashion week 2009 when Jenn and I waited, freezing our tooshies off for a glimpse of the cutie designer.  We did not leave disappointed! 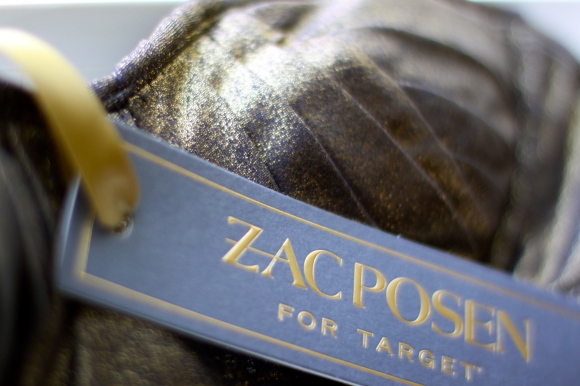 My second find was a vintage skinny tie for my handsome hubby.  Not that he knows who Yves Saint Laurent is…although he can pronounce his name better than I can.  Soooo exciting…my heart is still racing…a designer tie AND my husband speaking french;) 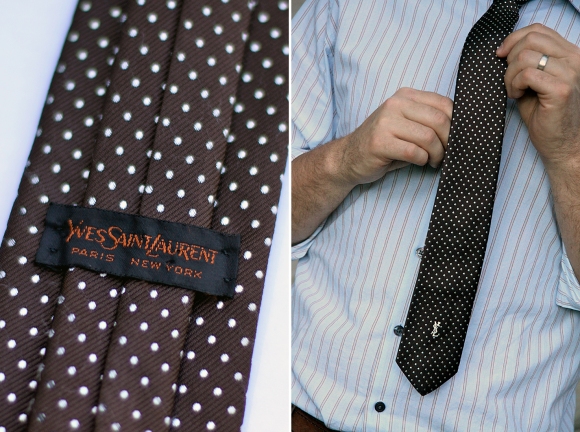